 Experience inspiration from your smartphone to our red carpet. Elevate!

Tickets now on sale.
GET TICKETS

We're hosting international and local filmmakers from the mobile filmmaking community to celebrate storytelling through film using smartphone cameras. IMFF 2022 is our first in-person festival since 2019. Each year, our festival takes place during the last weekend of April. 2020 & 2021 took place online.

Join us and the mobile filmmaking community to celebrate sharing stories as films using smartphones. Watch films you won't believe were shot with a phone like yours. Meet professional filmmakers and novice filmmakers in this festive three-day event where you'll watch films, participate in Q&A Panels and Sessions, learn how to make your own films during a mobile filmmaking workshop, participate in our exciting Red Carpet Extravaganza show, win a prize in our raffles and more!

Come for the fun. Leave inspired.

On this space we are featuring the six feature length films that will screen during IMFF in San Diego. Meet professional filmmakers Caroline Spence and James Smith with actors Robert Roworth and Kelly Calabrese James and Caroline are flying into San Diego from the United Kingdom to present their feature film, Surveilled and will attend the festival all three days. Inspired by popular crime novels depicting a violent serial killer, a copycat murderer emerges to terrorize the town of Clairmont. I Feel I Have Lost Something

The evolution of humanity has come to the point of making the entire population immortal, to put an end to the suffering caused by death, disease, and wars. Michele, tired of the monotony of his own existence, enters a mysterious house, one of the last places where, whoever wishes, can still exercise the right to die. Looking around upon arrival, Michele realizes the house is nothing more than a pleasant place, suspended between reality and dream, where the memories gradually erased by eternity come to life. A man consumed by grief, loses his ability to speak after the death of his mother. As his life begins to fall apart, and he detaches from the world around him, he seeks the help of an unconventional doctor. The results are dreamlike, reflective and often beautiful as he tries to come to terms with his loss and find his voice. In real world we didn’t get used to question the reality of all that’s happening. That’s why even the most fantastic events look as reality to us in our dreams. Sometimes when we sleep we get ahold of our mind control and we start to understand what to do next. Unconscious dream turns into lucid dreaming. iPhone 8 plus and iPhone X

ONE PUNCH is a gritty, teen drama about Matt Mercado, a young Italian Australian man on the cusp of adulthood, struggling in his final year at high school and trying to hold on to the friendships and innocence of his youth. The Woman Who Robbed the Stagecoach

One of 12 Westerns made in 12 months during 2020, this film tells the true story of Pearl Hart, played by Lorraine Etchell, a woman who goes through a series of bad relationships with men, eventually turning to a life of crime with a European drifter named Joe Boot (Travis Mills). Together they decide to rob a stagecoach, leading Pearl to be one of the most famous female outlaws of all time. 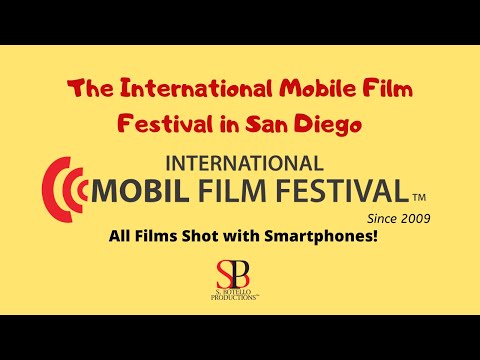  Mark the dates & get tickets! What kind of crazy idea is this?

Founded in 2009, the IMFF is a pioneer in the global smartphone filmmaking industry.

The IMFF in San Diego has gone through a transformation as the leading festival of its kind for professional and independent filmmakers making feature length and short films using the camera in their smartphones.

We think you and everyone who wants to can be a filmmaker. Are you ready to be a part of the global mobile filmmaking community?